Taking the Biscuit: How many free hot drinks and biscuits are excessive?

In a bit of festive fun, PenARC researchers lent their free time to help colleagues solve a critical question: When NHS staff are offered complimentary hot drinks and biscuits, how much could be too much?

When free hot drinks and biscuits are on offer to healthcare staff, how much is reasonable to take before it’s deemed “excessive” consumption, ask researchers in the Christmas issue of The BMJ?

Might some staff be “taking the biscuit” while others end up getting the short end of the teaspoon?
And could imposing limits on free refreshments for staff achieve nothing other than fostering resentment and even counterintuitively increasing consumption? 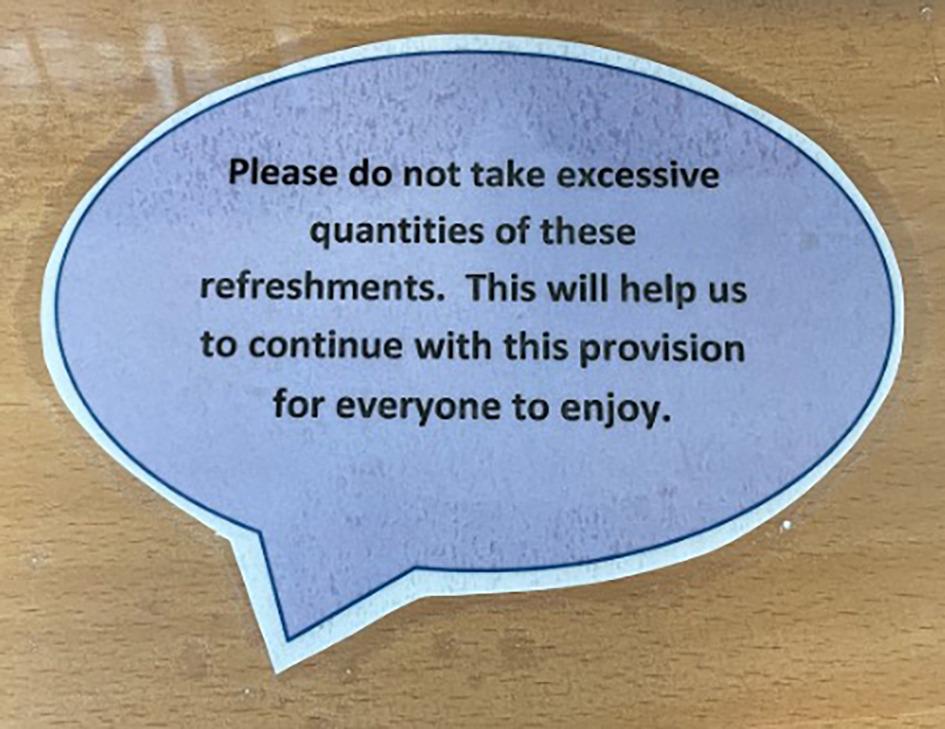 Observed signage in a hospital library

To find out, they surveyed 1,874 healthcare workers and academics, asking how many free hot drinks and packets of biscuits they would take during a single visit to a hospital library before considering their consumption “excessive.”

Having collected data over a four-week period, they found that respondents would take an average of 3.32 drinks before considering it excessive.

This is slightly higher than the average number of hot drinks respondents consume over a typical day when left to supply their own refreshments (3.04). Coffee is the drink of choice for just over half of respondents.

Department of work or clinical specialty also appeared to have an impact on the number of free drinks deemed excessive. General practitioners, for example, would consume more free hot drinks than staff working in emergency departments (average 3.67 v 3.22).

Regardless of beverage choice, respondents considered taking more than an average of 2.25 packets of free biscuits to be excessive.

This varied by role, with doctors having a slightly higher threshold for acceptable number of packets taken than non-doctors (average 2.35 v 2.14).

The number of packets perceived to be excessive also varied by time in role (average 2.89 for those less than two years in role compared with 2.16 for those more than eight years in role).

Although no formal cost effectiveness evaluation was carried out, the researchers estimate that a centrally funded initiative to provide all NHS staff with three hot drinks daily (excluding milk) would cost about £32,692,935 (€37,987,556; $39,570,875) per year.

The researchers point out that office workers have previously identified free hot drinks as a more important workplace benefit than free support for mental health, and free coffee is associated with improved morale and productivity.

“Given the current concerns over the morale, recruitment, and retention of NHS staff, the estimated £21.7bn cost of a potential staff exodus, and the well documented challenges facing providers of healthcare and social care, the provision of free hot drinks and biscuits could be a worthy and cost effective expense,” they write.